Given its particular location, the Tōhoku region has an interesting history that slightly differs from the rest of Japan especially in ancient times. We can start tracing its history beginning with the Jōmon 縄文 period (from about 12,000 BC to about 300 BC); in this time, in Tōhoku area as in other part of Japan, we have a predominance of such activities as gathering, hunting and fishing, also due to the climate warming of the era.

Towards the end of the Jōmon period, from the continent (China and Korea) is introduced the new rice paddy field cultivation, and starting from the north Kyushu and Kinki region, Japan enter the Yayoi 弥生 period (300 BC – 250 AD). The new culture reaches Tōhoku relatively quickly, since we witness the introduction of rice paddy field from the beginning of the period, but the actual reception of the practice is complete only around the second half of Yayoi period. The same region of Kinki is also the focal point from which the Kofun culture (250 – 538 AD, word kofun represents the type of burial mounds typical of this era) spread north, reaching Tōhoku and developing from the area of Sendai 仙台and Aizu 会津, and the inner part of Yamagata prefecture 山形県. The most renowned remain of the period is probably the raijinyama kofun 雷神山古墳, in Natori-shi 名取市, Miyagi-ken.

The northern part of Tōhoku, the present Aomori-ken, witness a longer resistance of the Jōmon culture, with the Yayoi and Kofun cultures spreading later.

Emishi and the ancient regions

Since the capital and the imperial and political power were established in the area called Kinki 近畿 (the central Japan), the northeast Japan, called Michinoku 陸奥, was probably considered a region occupied by people quite different from those in the capital and surrounding areas. The culture of this area was probably extremely different from that of central Japan, and the tribes and societis of this territory tended to rebel against the imperial control. 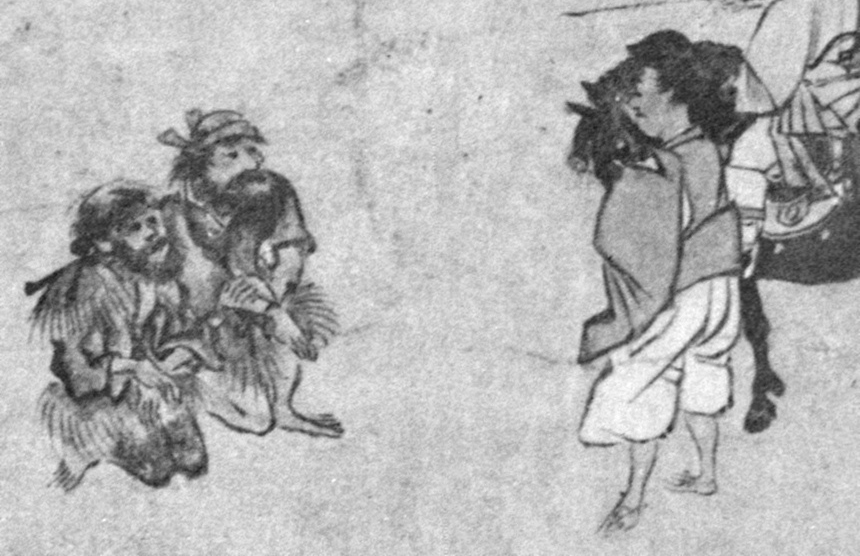 We also have an archeological evidence of a barrier, the Shirakawa barrier 白河の関 (Shirakawa no seki), set up in the V century on the Ōshū kaidō 奥州街道, the main route that connected the capital with the northern portion of Honshū, for protection against the barbarians of the north. Shirakawa barrier may be considered the landmark of the national boundary until the closing years of the XII century. Nonetheless, throughout Nara period, the northern border with the Emishi was vaguely defined.

From the second half of the VII century, the Imperial administration pursued a stronger burocratization and centralization of the government, shifting from a great level of decentralization in the surrounding areas to a more strict central administration system, which broght to control over the area of present Fukushima-ken, Miyagi-ken and south and central Yamagata-ken, and the establishment of Michinokuni territory. At the same time, on the inner sea, the Yamato rulers extend their control over the area included within Joetsu 上越in Niigata, leading to the creation of frontier bases called saku柵to further go north. In 647, we see the establishment of 渟足柵 (Nurarinosaku), and 盤舟柵in 648 a.D.

A matter of borders

We can see that the Nara period witnessed the emergence of a more define boundary concepts with the creation of administrative units (クニkuni), bringing the distinction between kenai 家内, the inner lands under the emperor’s direct control, and kegai 家外, areas outside the direct administrative control.
In this contest, it is possible to better understand the relation between the central Nara authority and the territories at its borders, in particular with the emishi in the northern portion of Honshū.

it is possible to infer a varied situation in which the term Nigi-Yemishi 熟蝦夷 reffered to emishi who obeyed the Imperial Court, Ara-emishi 麁蝦夷to those who opposed the Court, and Tsugaru 都加留 to those who lived at the most distant point from the capital.

There was a south-to-north progression from districts identical to those in the interior, to special frontier districts, centered on stockades inhabited by Japanese colonist-soldiers, to emishi district ruled by indigenous pro-governments chiefs, to emishi territory completely outside the government’s authority. The border, in other words, took the classic zonal form of a frontier. This frontier moved progressively northward during Nara and early Heian periods as the result of military campaigns. Overt warfare largely ceased after the ninth century, but the process of establishing new districts continued until all of the northern Honshu had been incorporated by the end of the Heian period.

We witness a first emishi rebellion in 720, after with the central amministration started the building of the castle Tagajō 多賀城 (that became the seat of both the Defense Garrison and the Mutsu government offices), and proceeded towards the northern area in order to achieve the complete control over the region; nevertheless, the army could gain complete control only over the costal region. The conflict over this frontier region continued in the following decades.

In the 780, the emishi rebellion of Iji no Azamaru 伊治呰麻呂 brought to the fall of Taga Castle, and the emishi resistance endured until the celebrated Sakanoue Tamuramaro 坂上田村麻呂 (758-811) campaigned victoriously against the emishi leaded by Aterui アテルイ, subjugated most of modern Iwate Prefecture, moving the Defense Garrison to newly built Isawajō 胆沢城, in the north; the emishi vowed alligeance to the Imperial court, and gained the name of fushū 俘囚, and partly forced to move to other areas of mainland Japan.

The North-east Japan in Medieval times

In later times, in particular from Heian period on, the central political authority became more and more fragmented among multiple power-holders in Kyoto and in the provinces. By around 850 we witness a gradual relaxation in the control over the frontier areas, and the emishi chieftains of the northeast could regained their strength.

In the area of ideology, the medieval period saw a profound change in boundary concepts: specifically the emergence of a closed, inward-looking worldview, on the one hand, and its association with strong ideas of pollution, on the other hand. These characteristics emerged around the year 900 and remained dominant until the XVI century. The shift to a closed worldview is testified by frequent references to Japan’s boundaries (sakai, shiishi) in medieval literary sorces. This contrasts strongly with works from Nara and early Heian, which are almost devoid of references to boundaries.
The second important characteristic of medieval boundary concepts was their association with the idea of pollution. According to Murai Shōsuke, medieval elites conceived of their world as a series of “concentric circles of purity and pollution” extending outward from the capital Kyoto to the “external regions” (iiki) beyond Japan’s border.

One problem with identifying the location of medieval frontiers is that the old provinces and districts continued to exist, at least in name, but the state ceased to play an active role in defining or maintaining territorial units of lical administration. It is difficult to say where the frontiers of the medieval Japanese state lay: we know the locations of individual landholding, and we know the general spheres of activity of the various public officias, but we do not know the outer limits of the system itself – precisely because little attempt was made to define these limits at the time.

The medieval state also gradually lost control over boundary funcions, that is, regulatory authority over cross-border flows of people, goods, and information. During the ancient period, boundary functions were generally monopolized by the state. For example, military administration of the border with the emishi in northeast Honshu was managed by another branch office known as the Chinjifu (Pacification headquarters). During the medieval period, control over boundary functions became more and more decentralized. In the north, the frontier fell under the control of a succession of boundary powers; over the course of the medieval period, these boundary powers changed in character from local delegates to autonomous warlords.

The Edo period saw the raise of different local daimyo who manage to acquire a significant influence. The Tōhoku suffered from a huge famine towards the end of the Edo period, which caused a huge number of death from starvation or epidemics, and an almost equal number of homeless population who started to move from the area in order to reach the Capital.

Troops from Sendai, following their mobilization in April, joined a northern alliance against Imperial troops in May 1868. From Wikipedia

In the end of the Edo Bakufu in 1868, the Northeast Japan witness the eruption of the Boshin war 戊辰戦争 between between forces of the ruling Tokugawa Shogunate and those seeking to return political power to the imperial court. In the north, the war went on longer aftet the defeat of the shogunate’s forces in the south, and saw the fight between the alliance of the local clans (mainly from the domain of Sendai, Yonezawa, Aizu, Shonai and Nagaoka), leaded by the Aizu family, against the imperial troops. In May 1868, the daimyō of Nagaoka inflicted high losses on the Imperial troops in the Battle of Hokuetsu 北越, but his castle fell on May 19. Imperial troops continued to progress north, with a major victory in the battle of Bonari Pass 母成峠, which opened the way for their attack on the castle of Aizu-Wakamatsu in the Battle of Aizu in October 1868.

THE TIME HAS COME... THE FIRST ONLINE COURSE ABOUT JAPANESE CULTURE IS HERE! I apologize for all these capital letters, they look a little loud; but the announcement is huge, it really is! I've been...

END_OF_DOCUMENT_TOKEN_TO_BE_REPLACED

If you are eager to discover some different itineraries in Japan and to travel in different regions, you should have a look at these few pictures. I confess, I fell in love with this...

END_OF_DOCUMENT_TOKEN_TO_BE_REPLACED

So I am back from Japan... it was too fast, and I miss it already! Anyhow, today I am not here to wine about it but to share with you some Japan travel ideas...

END_OF_DOCUMENT_TOKEN_TO_BE_REPLACED

While traveling in the North, we stopped in Tsugaru region, where we found the amazing Osamu Dazai residence in Goshogawara. All pictures are mine

END_OF_DOCUMENT_TOKEN_TO_BE_REPLACED

Mount Osore, whose name is generally translated with Dread Mountain, is a sacred mountain raising in the middle of the Shimokita peninsula 下北半島, in the northern part of Aomori Prefecture. This isolated location, at the...